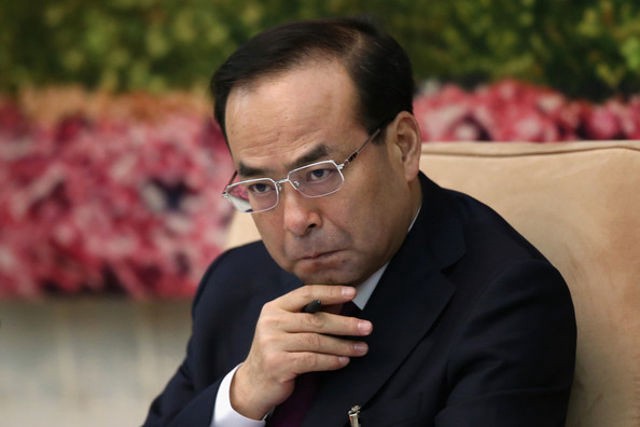 Tianjin (AFP) – A former top Chinese Communist Party official who was once tipped for a leadership post pleaded guilty to accepting millions in bribes at his trial Thursday, the latest senior cadre to fall in President Xi Jinping’s sweeping anti-corruption crusade.

Sun Zhengcai, a former Politburo member and party chief of the southwestern mega-city of Chongqing, was accused of taking advantage of his position to seek profits for others and illegally accepting money, according to the court’s Weibo account.

Sun and his alleged associates were also charged with accepting money and goods worth 170 million yuan ($27 million) in return for providing help to unspecified organisations and individuals with engineering contracts, business operations and other matters, according to the No.1 Intermediate People’s Court in the northern city of Tianjin.

Sun pleaded guilty and “expressed penitence”, the court said, adding that it would make a ruling at a later date.

The court said more than 130 people attended the trial, including members of the country’s top political advisory body and media.

But some 20 plainclothes officers prevented an AFP reporter from entering the court and surrounded the journalist for more than 20 minutes, saying she should have registered to attend the hearing in advance. One officer pushed the journalist and shouted.

Sun, 54, had once been tipped for promotion to the Politburo’s elite seven-member standing committee, which rules the country and is presided over by Xi.

As the youngest Politburo member, Sun was even seen in some quarters as a potential successor to Xi.

Sun was the first serving member of the 25-person Politburo to be placed under investigation since Bo Xilai, another former leader of Chongqing, who was jailed for life in 2013.

Xi has presided over a popular anti-graft campaign since coming to power in 2012 that has punished more than one million officials, but critics have compared it to a political purge.

The National People’s Congress also expanded Xi’s anti-graft campaign by creating a national supervision commission that will look beyond party officials and scrutinise millions of public servants at all levels of government.

Sun’s case showed that the party had some concerns about potential vulnerabilities to its rule.

Liu listed former security czar Zhou Yongkang alongside Sun and Bo as part of the conspiracy, which was rumoured to have involved military officials.

All three have been ousted from the ruling Communist party (CCP) and arrested or jailed on corruption charges.

Sun was expelled from the CCP in September after an investigation by the party’s disciplinary body found the politician had abused his position by taking bribes and trading power for sex.

As the country’s fourth largest city and an industrial metropolis in the southwest of the country, Chongqing is a major post for ambitious politicians.

When Sun became Chongqing’s chief in 2012, he was tasked with erasing Bo’s influence on the city.

But last year the party’s discipline inspectors publicly rebuked Sun for failing to get the job done, and his downfall came months later.

Sun was replaced in the city by Chen Miner, a former Xi aide whose profile was elevated by the move.

Chen was given a spot on the powerful 25-member Politburo at the Communist Party Congress in October.

By Laurent Thomet and Joanna Chiu in Tianjin