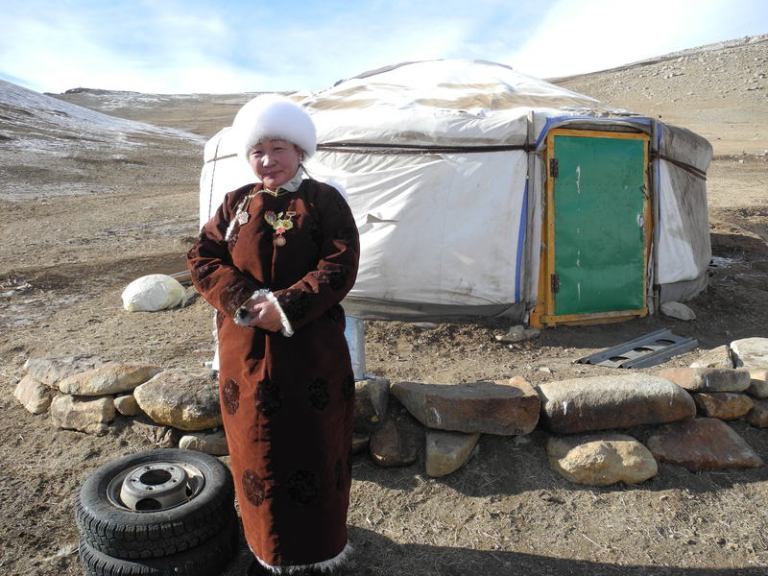 Nature has been hard on Mongolia. Little rain in summer followed by too much snow and cold in winter is killing off the country’s livestock, leaving the people who depend on them in dire straits.

Ulziit, Mongolia (dpa) – From a herd of hundreds, a family of six women living in the remote mountain ranges of central Mongolia are down to 76 head of goat and sheep.

“We need about 500 livestock to support ourselves, but the conditions make it hard to keep the animals alive,” said 24-year-old Narmandakh.

Narmandakh’s father was killed when he was struck by lightning ten years ago. She said she now worries about her mother, who has been gone for over a month after she left to hitchhike to the nearest town to collect food assistance coupons.

A few kilometres away – across icy stretches of empty land – another herder family has made piles of around 100 recently deceased dead animals. Their loyal dogs guard skeletons.

Mongolia is experiencing a natural disaster called a dzud. The phenomenon usually occurs after a summer drought is followed by heavy snowfall that makes already meagre pastures inaccessible to livestock.

The national government appealed for international aid on Wednesday, stating that snow has covered more than 70 per cent of the territory and livestock losses have reached at least 125,000.

Ninety-eight districts are experiencing dzud while 113 districts are on the edge of entering dzud, the government said in a statement.

With evening temperatures averaging minus 39 degrees Celsius, nearly a million affected people could lose most of their livestock and face starvation, according to the Information and Research Institute of Meteorology, Hydrology and Environment.

Around half of Mongolia’s population of 3.1 million rely on livestock production. Worsening dzud would mean a large increase in unemployment and additional strain on the country’s social welfare services.

Each sheep or goat – the most common livestock – is worth around 30 US dollars in Mongolia. The prices for animal skins, meat and dairy have been dropping as the vast Gobi desert spreads. A camel is worth about 600 dollars and a horse about 200 dollars, according to estimates by the Asian Development Bank (ADB).

“We feel global warming happening to this area. Less vegetation is growing, and rodents are increasing because with shorter grass they can mate faster. This is a huge problem because they are eating the grass before our livestock can,” said Uranchimeg, 51, a leading herder in Bayankhongor province.

Mongolia’s average temperature has increased by 2.1 degrees Celsius since 1940. That is more than double the rise of average global temperatures.

Uranchimeg has 600 head of livestock, including 180 cattle, 200 sheep, 150 goats and a few horses. She said she has been able to keep her herd healthy because her family can afford to purchase fodder to get the animals through the winter.

Other families who travel vast distances in search of viable pasture land are not as lucky.

Mongolia’s Ministry of Foreign Affairs estimated that around 4.4 million dollars is required for emergency vehicles, warm clothes, medicine and food to assist herders, as well as hay, fodder and vaccination to keep livestock alive.

However, the government has stopped short of declaring a state of emergency, which is required before some international agencies can allocate funding for emergency relief.

“We have put aside 3 million dollars to help with disaster response, and expect total aid from agencies could amount to around 10 million,” said Robert Schoellhammer, country director for the ADB.

“But the national government needs to declare a state of emergency before we can step in,” Schoellhammer told dpa.

Mongolia last declared a state of emergency for the dzud of 2010, when animals died at a quarter of a million deaths every week through the winter.

With temperatures in Mongolia generally extremely low until May, the family of women living on the mountain range are unprepared for the coming months. They are relying on donations from neighbours and the local government.

“We don’t want to leave. We enjoy the fresh air and nature and tending to our animals,” said Narmandakh, shivering in her thin coat.

Uranchimeg has a different view, despite being relatively successful.

“If I were a young person under the present conditions, I would move to an urban area,” she said.