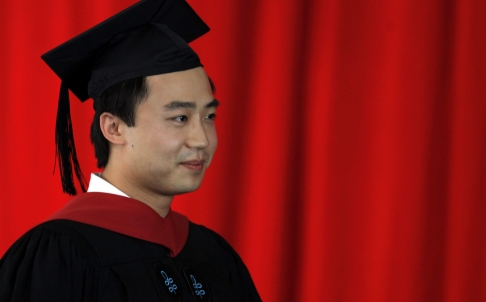 Bo Guagua, the son of disgraced former Chongqing party secretary Bo Xilai, appears to be enrolled in the prestigious Columbia Law School at Columbia University, according to public records available on the school’s website.

The university directory shows that a student with the unusual name of Bo Guagua is registered as a student at Columbia Law School.

“I learned from a source closed to Bo Guagua that he was going to law school, so I was curious and checked the websites of some law schools,” said Vincent Ni, a Beijing-based journalist who used his Twitter account to release a screenshot of Guagua’s online student listing on Monday. “I think Columbia is a good choice for him,” said Ni.

Columbia, located in New York City, is rated the fourth best law school in the United States, according to US News & World Report, and is the most expensive law school in the country, according to Business Insider’s 2012 rankings, with tuition set at US$57,838 for the 2013-2014 academic year. Guagua would most likely enter the juris doctor programme, a typically three-year degree after which graduates could sit for licensing exams to become professional lawyers.

Columbia has yet to confirm Guagua’s enrolment with the South China Morning Post, but Guagua’s potential classmates have already begun to speculate about his sources of funding.

“Bo Guagua has his family’s financial resources at his back, but that’s not unusual for Columbia students,” said a current Columbia Law School student who asked not to be named. “I think my classmates would resist the temptation to judge him based on his parents’ troubles.”

Columbia Law School students graduate with an average debt load of US$141,607, according to a 2012 report by US News & World Report.

Professor Joseph Cheng Yu-shek, professor of political science at City University of Hong Kong, said: “This in the eyes of ordinary people is a rather logical choice given the fact that his mother is in prison and his father will likely serve a prison sentence. Staying outside China will probably give him a better environment to pursue his academic studies, and it can also be speculated that with both parents in person the family would need someone to manage the family’s financial assets outside the country.”

Guagua’s father, Bo Xilai, 64, is expected to stand trial soon on bribery, abuse of power and corruption charges in Jinan, the capital of Shandong province and if convicted, could face the death penalty or life imprisonment. He has not been seen in public for 17 months.

The announcement of his indictment came almost a year after the sentencing of his wife, Guagua’s mother, Gu Kailai.

Gu, 54, was given a suspended death sentence in August last year for the murder of British businessman Neil Heywood in Chongqing in 2011.

Heywood is understood to have facilitated Guagua’s admittance to the prestigious Harrow School in Britain as the first Chinese citizen to ever do so.

The illustrious son then studied in Oxford and completed a Masters programme in public policy at the Kennedy School of Government at Harvard University in May 2012, shortly after his parents’ fall from grace.

His attendance of prestigious – and expensive – elite academic institutions and lavish lifestyle had previously fuelled criticism of corruption against his father. Guagua disputed these allegations in an open letter published in Harvard’s student newspaper, The Harvard Crimson, in May last year. His tuition and living expenses were funded only by scholarships and “my mother’s generosity from the savings she earned from her years as a successful lawyer and writer,” he wrote.