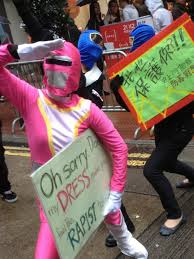 This was published in the South China Morning Post on November 26, 2012.

Hundreds of conservatively dressed men and women marched yesterday in “SlutWalk”, a protest against social attitudes that blame victims of sexual assault for being attacked.

Some wore full-body fluorescent suits and held signs saying, “Oh sorry, does my dress make you feel like a rapist today?”

“We dressed up in ‘protective suits’ to highlight the absurdity of blaming the victims of sexual assault,” said Elene Lam Yee-ling, advocacy officer for RainLily, a rape crisis centre.

The movement was sparked by a Canadian police officer’s remark in January last year that “women should avoid dressing like sluts in order not to be victimised”.

Marches have been held in more than 100 cities.

“The message that has become so popular is that it doesn’t matter what you wear or whether you go out at night – no one ever deserves to be raped,” said organiser Angie Ng.

In some cities, critics say use of the word “slut” and protesters’ funny or sexy costumes can take the focus away from the serious nature of sexual assault. But in Hong Kong, protesters and passers-by said they thought the message of the march was clear.

“They’re trying to raise attention about why it’s wrong to blame the victim. I supported the cause as soon as I learned about it,” said Mok Hing-luen, a social science professor at City University.

Ninety-one cases of rape were reported to police last year, down slightly from the 112 cases in 2010. RainLily says the true figure is much higher, with a woman raped in Hong Kong every eight hours, but most cases are not reported.

“My friend was raped by her uncle when she was 12 years old and her parents told her to shut up and not tell anyone,” said Rufus Redsell.

Redsell was among the men who made up nearly half of the SlutWalk participants, and which included lawmaker “Long Hair” Leung Kwok-hung. “We don’t live in an equal society when women are blamed for being raped and turned into sexual products in media and advertisements,” Leung said.